This is what greeted me at the back door when I came home Friday night.

Happy Friday the 13th everyone. I am with cold at the moment, and the overall congestion and achiness has me a bit miserable. Surprisingly, despite the two germy kids I live with, I haven’t had a cold in a long time. I guess my luck was up.

I’m writing this as I wait for a dental appointment. Like most people, I approach these visits with dread – even though I brush and floss regularly, I always worry that I’m going to be scolded for not doing it right. It’s like I’m waiting to see the principal to discuss truancy, or poor grades. I wonder if dental hygenists are trained on proper scolding technique as part of their curriculum.

Let’s move on…to why I started this post. Mostly, it was to share the delightful pic of Brendan collecting chocolate-filled plastic eggs in my sister’s back yard. He had so much fun, and was so focused. He barely lifted his eyes from the ground.
As for Nathan, he lost the thread about a minute after we went outside – he was far more interested in collecting the decorative white rocks from the garden. But they both enjoyed themselves, so that’s what really matters.
The weekend was lovely – we got to spend time with my sister and her kids, and I also had brunch with my sister-in-law and her sister and her nephew.
Brendan proved that he invites injury wherever he goes (a trait he inherited from his mother, for those who are curious). The poor kid ended up with scratches, a huge scrape on his knee, a huge sliver in his hand, and various other bruises. All in a span of 24 hours. It’s a gift.

Oh, and have I mentioned that I have a cold?

Before I begin, I need to state that this is being written ( with two thumbs) on my iPhone. In the car. I’m not the one driving. So, please excuse typos and strange iPhone autocorrected words.
We are headed south to visit my sister for Easter. This will be my first visit home in a year. I do see my sister, but usually she heads to visit me in Toronto.

Anyway, on to the main event. Those of you who have been paying attention may have noticed that I’ve been neglectful of my blog for the past couple of weeks. Believe me, it’s not that there hasn’t been stuff for me to talk about. I have no excuse other than wanting to disconnect from the interweb and just read my book. Alice Hoffman, The Dovekeepers. I am obsessed with this book (that I’m reading on my Kobo). So good. Here’s a link to the book.

A big milestone was reached in Brendan’s life over the past couple of weeks. As soon as the weather started to turn nice, we brought out the tricycle. It took one short ride to see that I’ve the winter Brendan outgrew it. So off we went to Canadian Tire to get a two-wheeler (with training wheels). He loves it and rides his bike with no fear. Nathan inherited (gladly) the trike, but only pedals if one of us is holding on to him or the bike.

As for the raccoons. I just don’t have he energy for he full story now, but to summarize: four raccoons were evicted from our chimney. Three were about the size of my hand. It cost $300, and (until they were gone) many sleepless nights. Damn raccoons.

Oh..and work is exhausting me lately. Anyone have tips on how I can become independently wealthy? 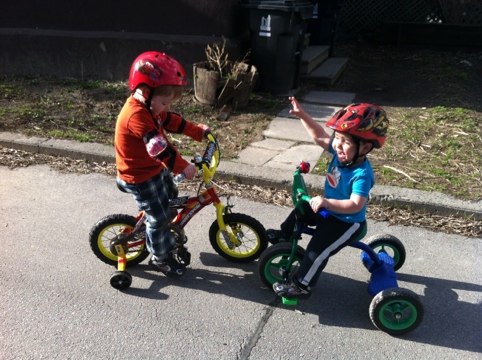